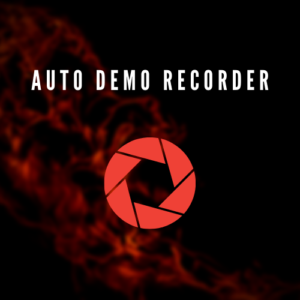 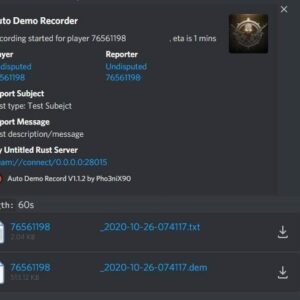 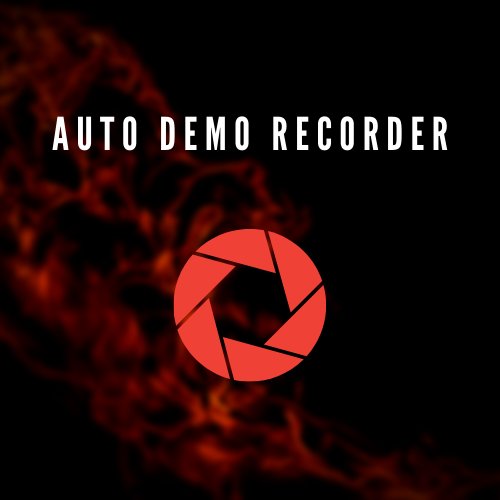 Records players automatically that have been reported X amount of times, with the ability to automatically upload the combatlogs & Demo files to a discord webhook.

Records players automatically that have been reported X amount of times, with the ability to automatically upload the combat logs & Demo files to a discord webhook. 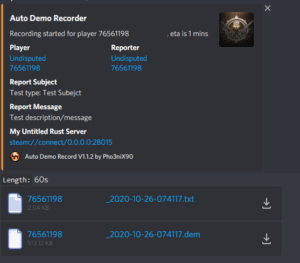 Disk usage whilst recording: +- 1MB per 1 minute. Discord has an 8mb upload limit and 100mb for nitro.

/record – Chat: This will initiate a self-recording.

autodemorecord.record [steam64id] [minutes] – Console: Usefull to record a player on demand, or a schedule from another plugin.

autodemorecord.blacklist remove [steam64id] – Console: Removes a player from the blacklist.

Permissions:
Permission autodemorecord.record is required for a player to initiate a recording of themselves. Useful for streamers, to provide them with footage at wipe end, or tournaments. The recording length will be “Auto record for X minutes”

“Auto record after X reports“:
Will start recording the player when these many reports have been received.

“Save/Load reports to datafile on reload“:
Useful when you aren’t using the above config, if you do it might not be necessary to save data overhead.

“Auto record for X minutes“:
the number of minutes the player should be recorded for.

“Discord Webhook“:
You discord webhook all information should be sent to.

“Discord: Notify if recording is started“:
Should a message be sent to the discord webhook when the recording starts?

“Discord: Notify if recording is stopped“:
Should a message be sent to the discord webhook when the recording ends?

“Discord: Include report with end message?“:
Should the player’s report be added to the recording end message?

“Split DEMO files for non nitro discord (8mb chunks)?”:
This will split files and upload multiple files to discord for non-nitro discord servers. If you have nitro with an upload limit of 100mb, then you can turn this off.

“Discord Webhook – Self Record”
All self-initiated recordings will post to this webhook, if not set it will go to the main one.

“Record if FlyHacked in last X seconds”
This will initiate a recording when a player rejoins the server after kicked for flyhacking.

“Save recording to server?”
If set to false, it will not save to the HDD, to save space. Make sure you have a webhook setup, otherwise it will still save as to not lose any demos.

If you want to trigger a recording from your plugin, you can do the following: