This plugin allows to craft, deploy, maintain, raid and use different types of carnival, fairground and theme park Rides. Players can set up their own attractions and anyone you allow can ride them for fun. You can charge for the pleasure – what a fun way to get rich! Some Rides come with music, some of them can kill you, some you can operate manually, some can be helpful from a tactical standpoint. Early Access comes with 4 attractions (with more already in the works!), fun physics, easy to navigate GUIs and a detailed documentation.

This plugin allows to craft, deploy, maintain, raid and use different types of carnival, fairground and theme park Rides. Players can set up their own attractions and anyone you allow can ride them for fun. You can charge for the pleasure – what a fun way to get rich! Some Rides come with music, some of them can kill you, some you can operate manually, some can be helpful from a tactical standpoint. Early Access comes with 3 attractions (with more already in the works!), fun physics, easy to navigate GUIs and a detailed documentation.

Check out the video.

The Vomit Comet, Merry-Go-Round, the Ferris Wheel and Mechanical Bull. Each unique, each with its own gimmick, each will make for a picturesque landmark AND a fun way to spend some scrap. 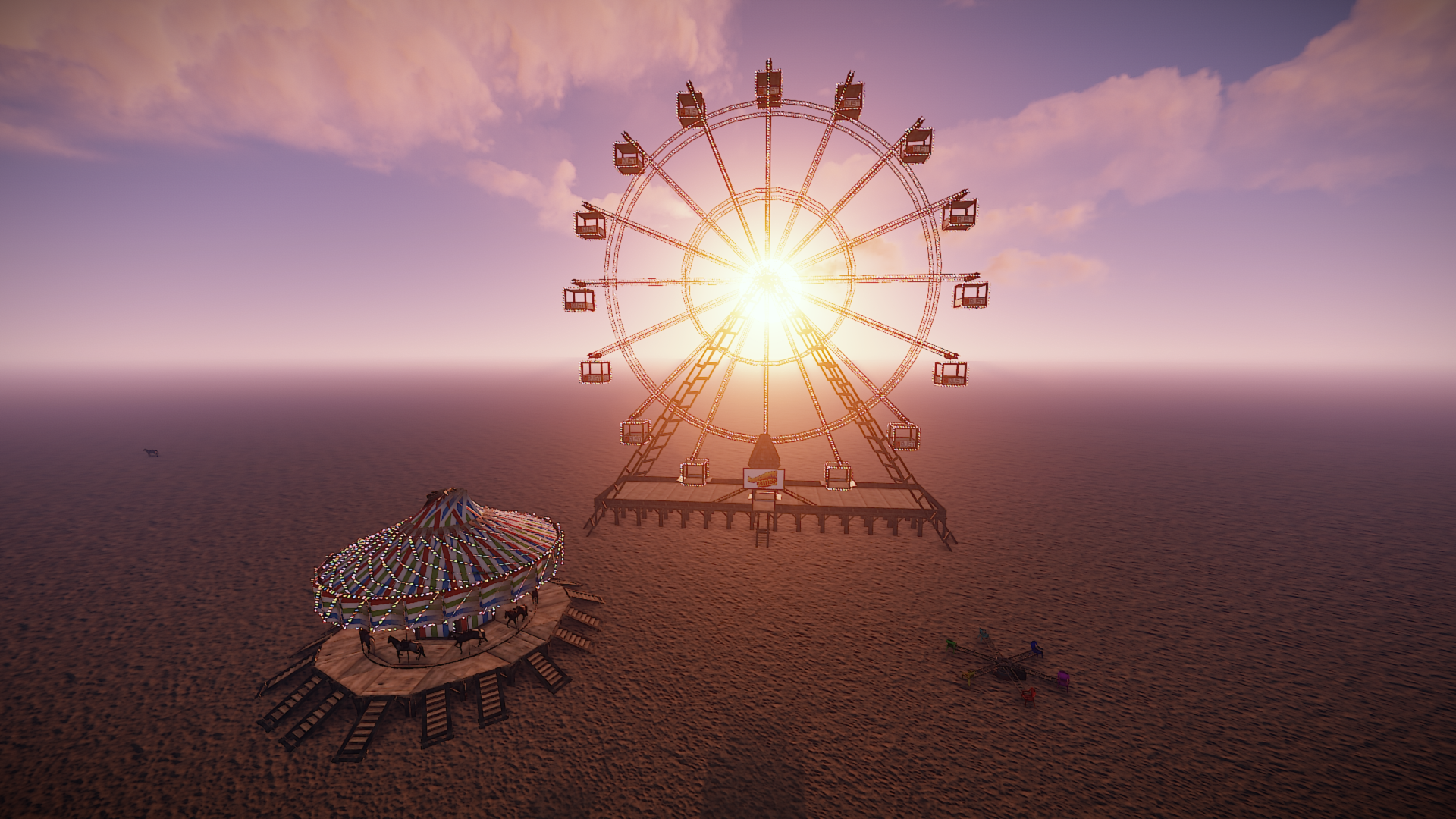 Easy on the CPU – despite its unprecedented scope

This plugin was made with optimisation in mind – and that process will never end. It utilises very cheap, “piggyback” physics updates that are built into Rust/Unity – no re-inventing the wheel, just re-purposing it. Amusement Rides can easily handle thousands of entities moving/revolving at once AND it looks as smooth as native Rust physics, with minimum overhead.

Gone are the days of spawning with hard-to-remember commands (but you still can, if you’re an admin). Just open your Workbench, see what Rides are available for that level (what they look like, how much they cost, what’s special about them), and get crafting! This feature can be disabled in the config if you only want admins to be able to craft Rides. 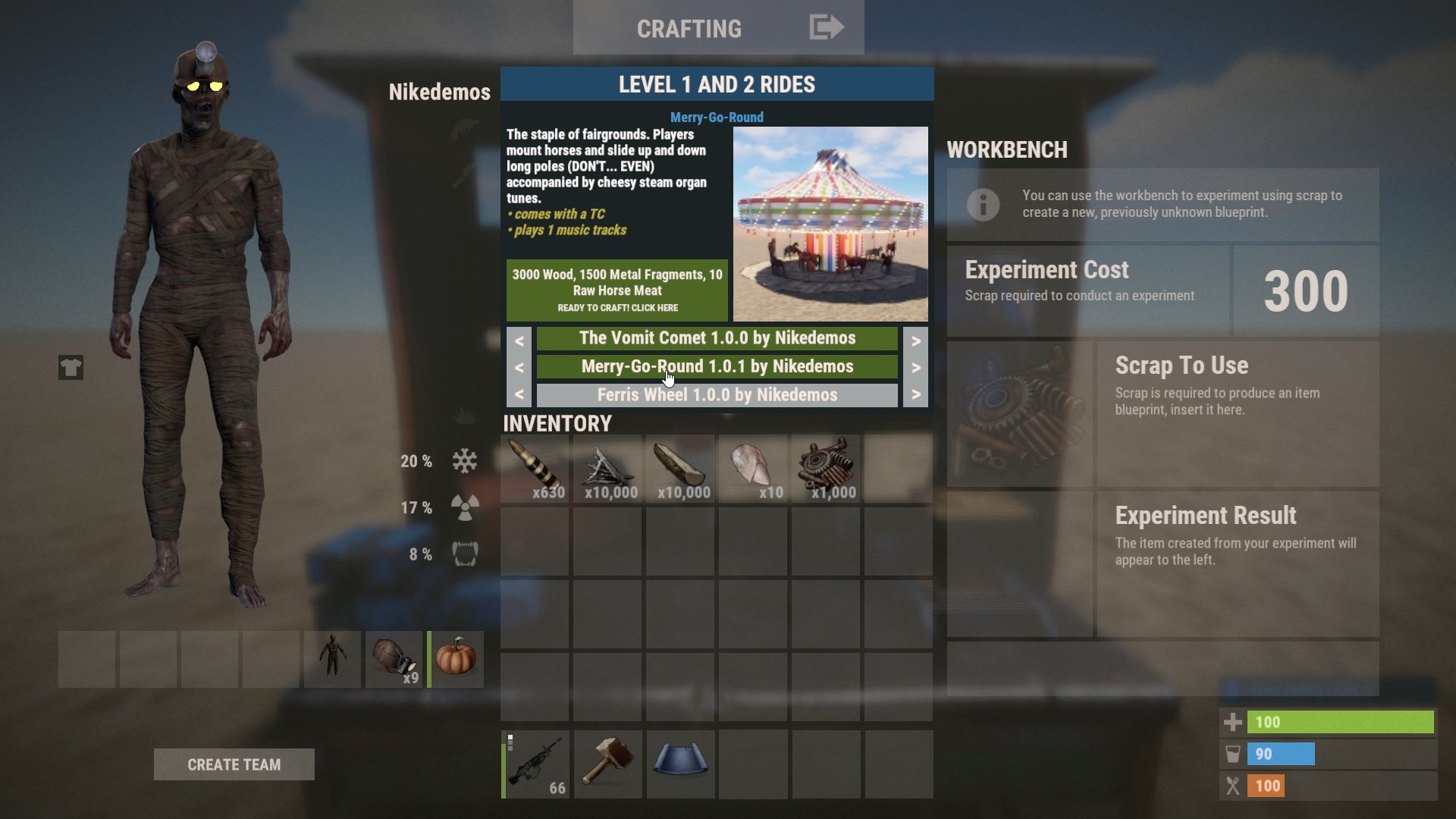 Every Ride is configured from a GUI, too. Authorised players can decide different settings about the Ride (and again, more settings coming soon – that’s why I left some space there!) 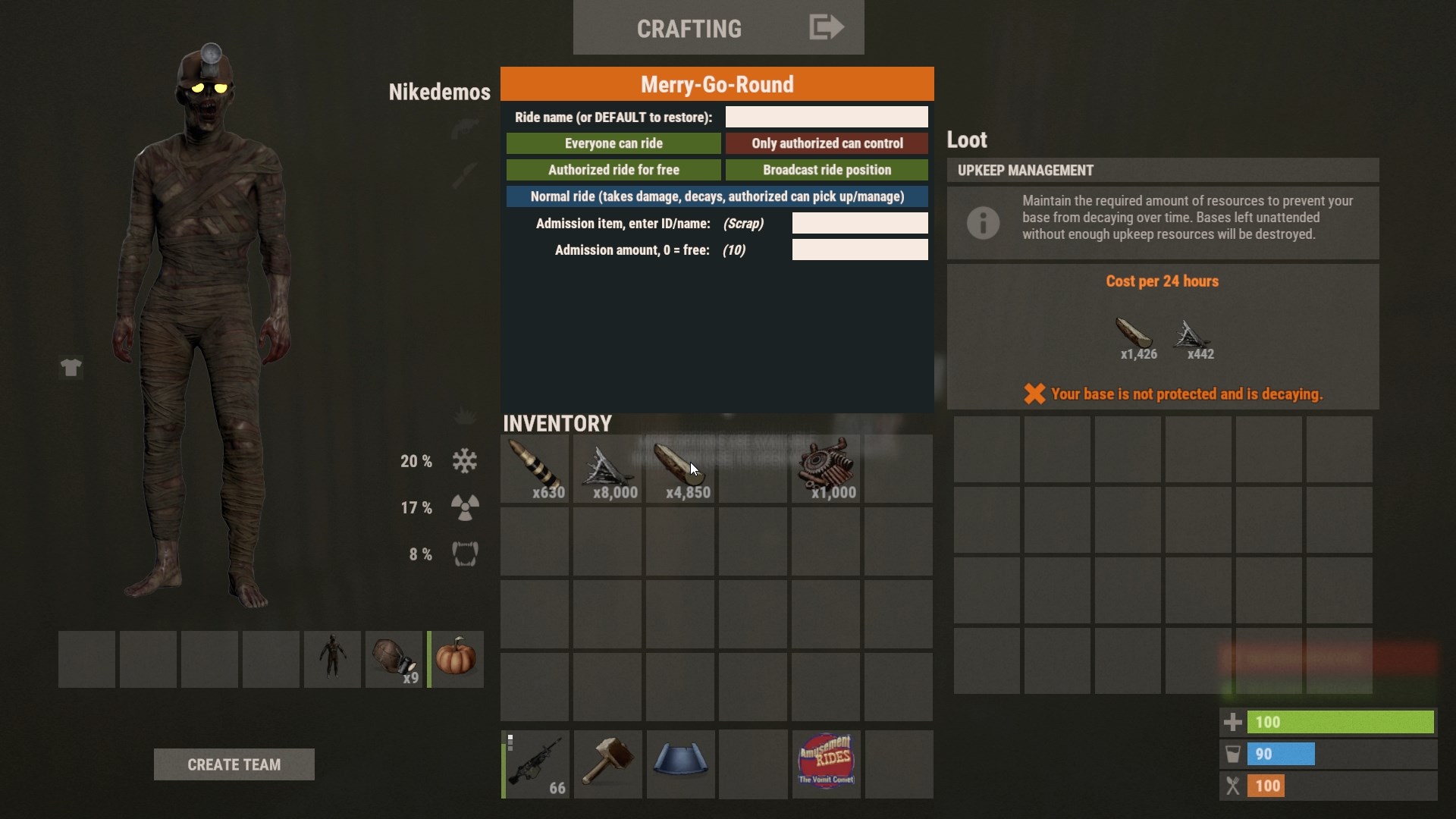 Different ways of setting up rides

By default, every player can craft any ride provided they have the right Workbench and enough resources. You can disable that in the config so only admins can deploy rides. Apart from crafting, as an admin, you can also give yourself (or another player) the ride item without crafting with one simple command. Another way is spawning the Ride directly where you are – this ignores any proximity checks for Rides an entities nearby. Again – everything’s in the documentation!

Just like Vending machines, Rides can attract visitors – both wanted and not-so-wanted! They usually hold upkeep resources and admission fee items in its container – so make sure you lock them up and keep an eye for those pesky raiders! Or better yet, pick them up once you’re done, and deploy them again anywhere, any time. Having a pop-up Carnival has never been this easy!

Some Rides are not just for fun/getting rich quick: they’re also useful on their own, as tactical structures. Roof camping from the Ferris Wheel? Hiding behind the door in the Merry Go Round? Launching yourself over the walls of an enemy compound with the aid of the Vomit Comet? Shhh, if anyone asks, you didn’t hear that from me…

Early Access: Why? What does it mean? What are the perks?

There’s only one way to properly test the limits of a plugin of this magnitude – with the help of you and your players. The advantages of getting the plugin during its Early Access phase are quite obvious: it gives you a chance to play around with Amusement Rides before anyone else – and also for a discounted price! – AND it gives me a chance to track down every possible edge case scenario where things might go wrong (bugs, plugin incompatibilities, features I might have overlooked etc). So it’s a win win, both for the developer AND the server owners.

As an Early Access User you will be exempt from the 6 server limit (upon verification) and you’ll get to test new Rides as soon as they’re out.

Being a part of Early Access crew also grants you a special role on the discord – and with it, all the latest scoop on the different cool things that I have in the works, including Amusement Rides!

Will there be more rides?

Sooner than you might think! All Rides added to the plugin during Early Access will end up in the “base” version, no extra keys needed when the official release 1.0.0 is out, everyone gets to keep theirs!

I’m not going to speak legalese here. It’s going to be short and to the point. By purchasing Amusement Rides you hereby agree to these conditions:

Are you looking for an awesome monument to host your Rides? Check out Gruber’s Amusement Park map!

(NOTE: This is a separate product by a third party Vendor. It’s not required for Amusement Rides, but it compliments them perfectly!)